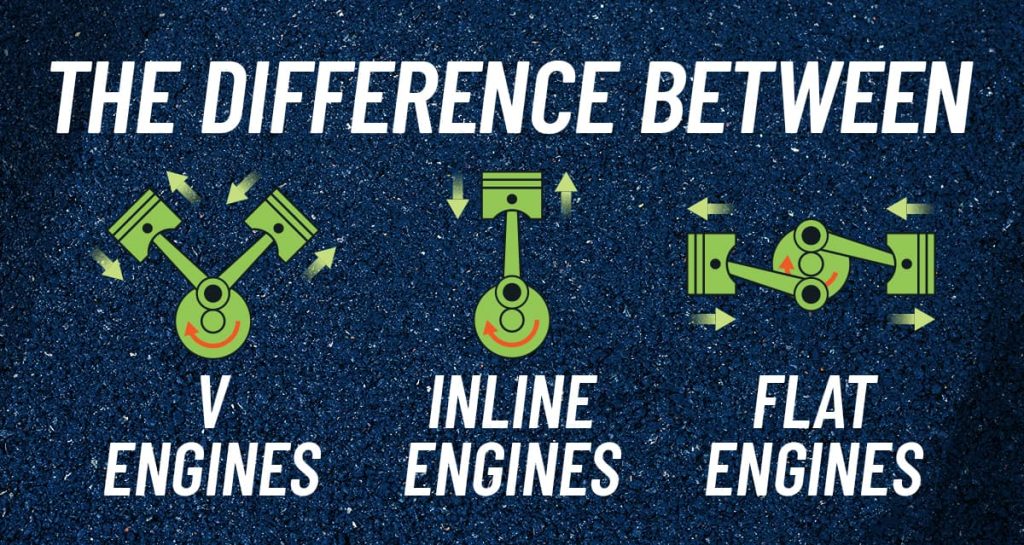 The Difference Between V Engines, Inline Engines, and Flat Engines

Interested in learning about the different types of engines available and what makes them different? Well, you’re in the right place. Before we explore the main types of engines, let’s talk cylinders for a second. The cylinder is the power unit of the engine, where fuel is burned and converted into mechanical energy that powers the vehicle. This means the more cylinders you have, the more power you have. The number of cylinders in a typical car could be four, six, or eight. The different engine types have their cylinders configured in different ways, as follows.

V Engines, one of the most common types of engine, have their cylinders configured in a V shape, and always have an even number of cylinders – the same amount on both sides of the V. These engines usually are at a 90-degree angle and are typically found in 6, 8, 10, or 12 cylinders.

Pros: The V configuration shortens the length of the crankshaft and can save space, has a low profile (for a car with a low hood), and produces more torque at lower RPM than other models.

Cons: V engines can be more expensive because they have more parts than inline engines. They are also taller than a flat engine.

Inline (or “straight”) engines have all their cylinders lined up in a row, which means they tend to be longer than the V configuration. For this reason, inline engines are usually found in 3, 4, 5, and 6-cylinder variations, as 8 cylinders in a row would be too long to fit in most engine bays. BMW is famous for its high-performance “straight sixes” (inline 6-cylinder engines). Four-cylinder inline engines have been extremely common in recent years due to their affordability, fuel economy, and reduced emissions.

Pros: Inline engines tend to be smoother than V engines and are less complex with fewer parts.

Cons: Longer and taller than V engines, inline engines can be harder to mount, and can also have balance/vibrational issues.

Flat Engines (also known as “boxer” style engines) are arranged so that the cylinders are oriented horizontally, so they oppose each other when firing (like they are boxing each other). A flat engine is essentially a V-style engine in which the V is opened up to lay flat. Flat engines are known for being used in Porsches and some Subaru models.

Pros: Flat engines are famous for having perfect balance and can offer sports cars high performance and power without vibration. Their low center of gravity can improve the aerodynamics of the vehicle.

Cons:  Wider than a comparable inline or V engine, repairs and maintenance can be an issue since the heads are basically on the side of the car.

If you’re an aspiring gearhead with a passion for cars and the desire to work with your hands, J-Tech Institute can provide you with the training you need to jumpstart your career as an Automotive Technician. Contact us today to learn more, or to schedule your visit to our 168,000 square foot facility in Jacksonville, FL.